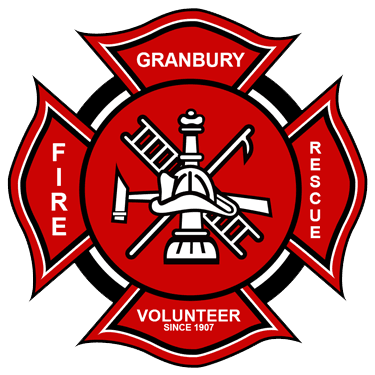 The Granbury Volunteer Fire Department (GVFD) was established in 1907 and is dedicated to the prevention, protection, detection, and suppression of unwanted fires in the City of Granbury, Hood County, and in surrounding areas. Meetings and training were held approximately twice a month in the First National Bank.

By 1910, Granbury’s fire department boasted 20 volunteers, a 30-gallon chemical wagon and a hook-and-ladder truck with a 40-foot ladder. Officials called volunteers to action by telephone and a public whistle at the water plant.

In February of 1915, the Granbury City Council signed a contract with the Granbury Water, Ice, Light and Power Company to provide the first around-the-clock attended fire whistle for the area.

Due to the building of Lake Granbury on the Brazos River, a group of concerned citizens decided to form the Hood County Volunteer Rescue Unit in 1969. It  assisted game wardens, the Brazos River Authority and local law enforcement with the search and recovery of drowning victims in Hood County. There were thirty members--all Hood County citizens. In the late 1970's, the Rescue Unit began vehicle extraction after members were called to a accident scene where the occupants were trapped in the vehicle. In 1979, the Unit purchased the first set of rescue tools in Hood County. Unit members continued to add equipment and personnel training to better provide a needed service to the citizens of Hood County.

GVFD volunteers respond to every major fire in Hood County. They also respond any time there is an injury accident in the city, and often work to extricate auto accident victims with specialized tools known as the “jaws of life.” Fire department volunteers are also first responders for major medical emergency calls in the area.

Granbury’s volunteer firefighters have an average response time of five minutes to an emergency call. Their quick responses, along with top-notch equipment, well-run organization, and access to water have earned Granbury an Insurance Services Office Public Protection Classification of Class 3 (out of 10, with Class 1 being the highest level of fire protection).

Granbury's Class 3 is one of the best ratings in Texas and ranks Granbury in the top 1600 fire departments (paid and volunteer) nationwide. Granbury Volunteer Fire Department achieved a Class 6 rating for its primary response areas beyond the city limits, which are defined as being within five miles of a Granbury fire station. These primary response areas were the first communities in the state without fire hydrants to achieve a rating less than a Class 9.

Granbury’s excellent fire protection classification rating keeps homeowners’ insurance rates at a reasonable cost within the city and in its nearby neighborhoods.